SCAVENGING THE COUNTRY FOR A HEARTBEAT: Poems Neil Shepard 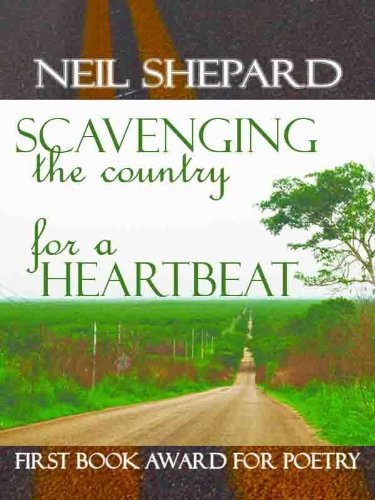 . . The pleasure of these poems is that their music both delineates and bridges the distances they evoke.” -- Mark Doty“There is a solid maturity about these poems that belies the fact that this is a first book. Shepard is, in fact, solidly mature, both in person and in craft. . . His special gift is the expansive narrative of image, a sort of hybrid of true narrative with emotionally crisp, almost lyric snapshots. There is both a pleasing directness and a pleasant musicality about Shepards work.” -- BooklistScavenging the Country for a Heartbeat takes readers on a journey from the Maine coast to the Pacific Northwest, from Vermont to the Florida Keys, from the Louisiana swamps to the plains of Kansas and Nebraska.

Guided by his belief that “what is missing/makes memory whole,” Neil Shepard revisits landscapes marred by conflict and compromise. What he discovers is solace and the possibility of transcendence. As a collection these poems detail an emotional evolution – a spiritual transformation – in which progress is measured in “the distances still stretching away.”About the AuthorNeil Shepard’s most recent books include a full volume of poems, (T)ravel/Un(t)ravel (Mid-List Press, 2011), and an offbeat chapbook, Vermont Exit Ramps (Big Table Publishing, 2012).

His new book, Hominid Up, is due in 2014 by Salmon Poetry Press (Ireland). His three previous books of poetry are Scavenging the Country for a Heartbeat (First Book Award, Mid-List Press, 1993), I’m Here Because I Lost My Way (Mid-List, 1998) and This Far from the Source (Mid-List, 2006).

His poems appear in several hundred literary magazines, among them Antioch Review, Boulevard, Harvard Review, New American Writing, New England Review, North American Review, Paris Review, Ploughshares, Shenandoah, Southern Review, and TriQuarterly. His poems have also been featured online at Poetry Daily, Verse Daily, and Poem-A-Day (from the Academy of American Poets). Shepard has been a fellow at the MacDowell Arts Colony and the Virginia Center for the Creative Arts, and he has been a visiting writer at the Chautauqua Writers Institute and The Frost Place.

He founded and directed for eight years the Writing Program at the Vermont Studio Center, and he taught for several decades in the BFA Creative Writing Program at Johnson State College in Vermont until his retirement in 2009. He founded the literary magazine Green Mountains Review a quarter-century ago, ande is currently its Senior Editor. He presently lives in New York City and teaches poetry workshops at The Poets House and in the low-residency MFA writing program at Wilkes University (PA).

Outside of the literary realm, Neil is a founding member of the jazz-poetry group POJAZZ.

Comments
Comments for "SCAVENGING THE COUNTRY FOR A HEARTBEAT: Poems":